Imagine getting your portrait painted in the fifteenth century. You’d probably be part of a powerful dynasty or monarchy, commissioning the most talented artist to capture your beauty and grace. With the desire for a painting to be admired for centuries to come, you would, of course, bejewel yourself in the most exquisite jewellery. When ambling around The National Portrait Gallery, I relish spotting the variety of incredible jewellery in paintings. From Botticelli’s religious masterpieces to Hockney’s modern portraits, the way artists - both past and present - portray jewellery is fascinating. Paintings provide us with the closest visual insight into what people wore and how they accessorised from the Renaissance era to the fin-de-siecle.

Today, we need only open Instagram to see into the lives of the elite. Our icons are on our doorstep. We follow their lives as closely as following the narrative of a novel. They wait, two clicks away, eternally adored and ready for us to mimic their very existence. Trends in fashion manifest on the global platforms of our phone screens - the impenetrable archive of our virtual lives. To our advantage (and disadvantage) history is now recorded through an array of multimedia. As we go back in time, history becomes increasingly reliant on other means: literature, legends, and paintings. Portraiture gives us an acute insight into the lives and customs of many historical figures. Take a look at six famous paintings and the exquisite jewellery portrayed within...

Girl With A Pear Earring (c. 1665) by Johannes Vermeer

The Girl With A Pearl Earring (c. 1665) is one of Vermeer’s most renowned works. The painting amounts to the same size as a small MacBook screen, yet boasts the most famous pearl earring known to man. The vivid colours animate the female figure in the painting, who captivates viewers with her innocent yet penetrating stare. Through the plump and moist lips, Vermeer adds something rather sensual to his painting. In being caught in a twofold glance with the girl, a moment of intimacy and allure is created. The painting has inspired both literature and films. Vermeer creates such a mysterious and enigmatic expression in his painting, which leaves viewers in a desperate fantasy trying to make sense of the hidden narrative. The pearl earring delicately gleams from the darkness. 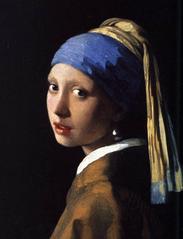 Portrait of Elisabeth, Empress of Austria (1865) by Franz Xaver Winterhalter

This nineteenth century portrait of Empress Elisabeth of Austria exudes celestial magic. The empress’ gown is sprinkled with hundreds of hand cut foil stars amongst the layers of satin and tulle. The German artist was renowned for both his Rococo and Neoclassical influence. This particular portrait exemplifies the formalities of royal portraiture. The expression and pose of the empress is typical to the conventions of the era. Over the years that Franz Xaver Winterhalter had the empress as his subject, he completed some more personal and intimate paintings of her, focusing on her flowing thick hair and natural beauty. For many, the focal point of this painting is the diamond edelweiss pins adorning the empress’ hair. The floral, star-like pins represent the Austrian Alps and therefore serve a patriotic purpose.This portrait demonstrates the affluence of monarchy during this period. Elisabeth’s pearl necklace and diamond hair pins beautifully frame her face, emphasizing the superior elegance and wealth of nobility. 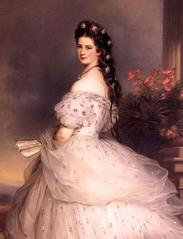 Portrait of Adele Bloch-Bauer I (c. 1907) by Gustav Klimt

Also known as the woman in gold, Klimt’s celebrated painting of Adele Bloch-Bauer is a jeweller’s paradise. Never before had gold been so lavishly and outlandishly used within a painting. The painting radiates a glow so intense it rivals summer’s golden hour. It is estimated that this portrait of Adele Bloch-Bauer took four years to complete. Bloch-Bauer was a wealthy society woman in Vienna, and became acquainted with Klimt in the summer of 1903. The portrait is peppered with erotic symbols such as triangles, eggs and eyes - iconography notorious to the unapologetic artist. Little did Bloch-Bauer know that she would be immortalised through one of the most famous, and a decade ago, most expensive paintings in the world. The female form in this painting seems to emerge from a canvas saturated with diamonds and gold, making Bloch-Bauer’s jewellery feel delicate and understated. If we focus on the choker necklace and thick cuffs, we can appreciate the decadence of such items. 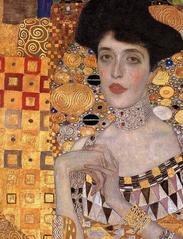 Georges Barbier was a french illustrator during the fin-de-siecle. His artistic talents were utilised in many spheres, from fashion and jewellery design to book illustrations. Barbier was a pioneer of his time. He was the mentor of a renowned circle of french illustrators, including Pierre Brissaud and Charles Martin. Incantation depicts Barbier’s renowned style. Early twentieth century Paris witnessed the birth of fashion magazines, which soon became very popular. Barbier illustrated many prints like Incantation for a number of these fashion magazines, including Vogue and Femina. The Art Deco style of the illustration showcases the glittering jewellery of the era, worn by the florid and elegantly dressed figures in the piece. Barbier’s attention to detail regarding the jewellery in Incantation reveals his talents as a jewellery designer as well as an artist. The powder blue gemstone drop earrings match the woman’s necklace, ring and even diamond belt in the illustration. To channel the Art Deco glamour presented within Barbier’s work, simply slip on Vanilo’s Macarena Cuff. As you feel the cool silver against the skin, you’ll be transported into the age of decadence, with all the affluence and adventure of a young flapper girl. 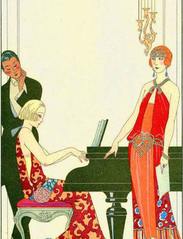 Henri Matisse left one of the greatest art legacies known to man. His incredible use of colour and form in his work earns him the title as one the leading impressionists of the twentieth century. The artist’s interest in the human form spanned until the end of his life, where his physical ailments meant he could only cut out abstract shapes of paper to create art. This 1920 painting was produced at the prime of his career. Matisse became acquainted with a young girl called Henriette Darricarrere who would be his artistic muse for almost the next decade. The abstract background of Ballerina perfectly compliments the structured form of the dancer in the composition. Matisse mimics the strong and robust physicality of the dancer within the emphatic brushstrokes and horizontal colour blocks in the background. However, the almost delicately placed pearl necklace truly draws the viewer’s eye. Matisse ever so slightly highlights the pearls towards the dancer’s nape, expertly creating a soft illusion of light. 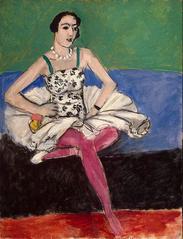 Self Portrait Dedicated to Dr Eloesser (1940) by Frida Kahlo

Frida Kahlo is one of the most influential feminist modern artists. Her work continually threads intersectional feminist narratives into contemporary dialogues, thus she leaves behind a legacy that surpasses the boundaries of her own time. Known for her vivid floral headpieces and bright jewellery, of course Kahlo is within our list of jewellery inspired by art. Photographs of the artist capture her love of accessories and jewellery, with energetic and statement jewels contrasting the sensitive soul that lay within. Kahlo’s Self Portrait Dedicated to Dr Eloesser is such an intriguing painting to examine. It was painted during a time the artist suffered from chronic pain from an infection in her right hand, hence the dismembered limb hanging as an earring. However, the earring also references the Mexican ‘milagros’ tradition whereby wax forms shaped in body parts in need of healing were left on religious altars. The portrait pays homage to her doctor who treated Frida and her ailments, and therefore evokes the love and friendship between the two. 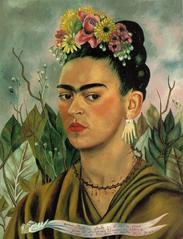